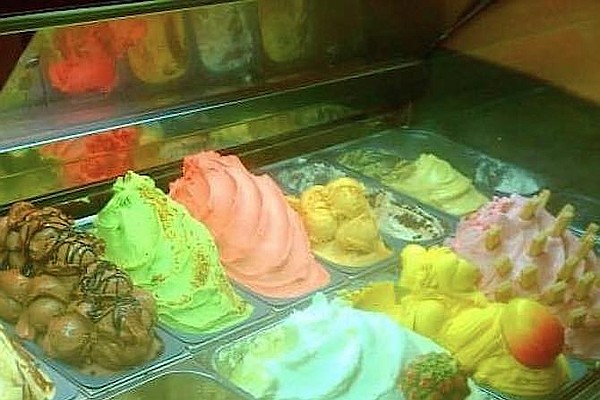 In the dog days of a pandemic summer, a new beacon of cold treats has begun to shine in Del Ray, its light getting brighter day by day prior to its opening in just a few weeks. Del Ray Boccato is nearly ready to offer up gelato, coffee drinks and savory snacks to the neighborhood and beyond, and owner Cristian Velasco is definitely eager to get started.

“I’m so excited. I feel like I’ve been born again with a lot of new energy,” Velasco said. “I cannot wait until I scoop out my first flavor.”

The café, which is located at 2400 Mount Vernon Avenue, is the culmination of a longtime desire to put down roots in Del Ray, Velasco said.

“I’ve had my eye on Del Ray for 10 years. … When I like to drive around, I always like to drive back to Del Ray. It’s like a beach town without a beach!” he exclaimed. “I love that little portion of Mount Vernon Avenue. … It’s a perfect demographic location for people from Alexandria, Arlington (and) Arlandria.”

So when one day he realized there was a space available directly on the avenue, Velasco jumped at the chance.

He sent an email to the owner “basically professing my love for Del Ray” and the owner responded favorably.

And this certainly isn’t Velasco’s first time opening a gelato and espresso shop: He’s the former owner of Boccato Gelato in Clarendon. The shop closed in 2018, leaving Velasco with plenty of time to pivot to a new location.

And there’s another elephant in the room that Velasco wants to clear the air about: His business relationship, or lack thereof, with Rob Shelton, the controversial owner of King Street’s Killer ESP. The two were one time business partners but went their separate ways a decade ago due to some differences of opinion about business philosophy.

Del Ray Boccato aims to open deliberately, growing its menu throughout the rest of the year. On the menu first: Homemade gelato, empanadas, coffee drinks and pastries.

One of Velasco’s major points of pride is his gelato display.

“I make an effort to make it really beautiful. Every gelato is individually decorated with a lot of love,” he said.

Of course, opening a new shop during a pandemic is a tenuous situation bringing up some unusual issues to work through. One of the biggest for Del Ray Boccato is how precisely Velasco’s team will be able to serve customers safely. To solve for this, the shop will be curbside and carryout only when it opens, and as the region sees good news with a potential vaccine or treatment, he will reevaluate.

But in the meantime, Velasco is basking in the warm welcome he’s received from Del Ray thus far and looking ahead to a grand opening. Del Ray Boccato is aiming to open its doors by the end of August or early September, he said.