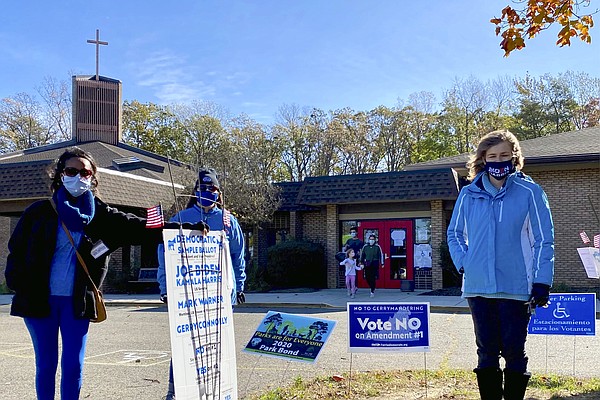 Twenty years ago, Virginia was a red state. Republicans scored Virginia's electoral votes in every presidential election since LBJ was reelected in 1964. Republicans held both U.S. Senate seats. The Grand Old Party had all the statewide offices, a majority of the congressional delegation and both chambers of the General Assembly. That was the environment when Mark Warner and Tim Kaine, both Democrats, ran for governor and lieutenant governor.

"Over the last 20 years, we've engineered the biggest political turnaround in the United States of any of the 50 states," said Sen. Tim Kaine as he watched voting totals on election night. "Partly it's our population. Partly it's Democrats in Virginia. We govern in a way that we're practical progressives. We’re solving people’s problems, and that’s a good model.”

The 2020 presidential election has yet to be resolved. But Virginia is now a solidly blue state, delivering 13 electoral votes to Joe Biden and handing Mark Warner a third term in the United States Senate. Election officials will continue receiving mail-in votes until Friday at noon, although the results of all the key races have already been determined. One result that is clear, though, is the success of a constitutional amendment creating a new 16-member redistricting commission to draw political boundaries for the General Assembly and Congress.

AT THE TOP of the ticket, Warner scored a solid victory against Republican Daniel Gade although Biden had more votes and a larger margin of victory. Appearing at his campaign headquarters in Del Ray, Warner called on Republicans and Democrats to put the divisive campaign in the past and look ahead to surviving the health risks posed by the pandemic and the economic uncertainty caused by the downturn.

"The only way we're going to be able to defeat that and truly build back better is if Americans become united," said Warner, speaking to a room of journalists and staffers. "That means ending the kind of attack rhetoric and mean-spiritedness that too often has infected our political discourse."

For now, though, the political discourse remains at a fever pitch. At press time, the presidential election is unresolved. Two hotly contested congressional seats in Virginia are too close to call. And lawyers are preparing for a season of legal challenges and trench warfare in the courts challenging state election laws on signature matches and late-arriving mail-in absentee ballots. Nevertheless, Republicans are facing an uncertain future in a state that has gone from ruby red to deep blue.

FOR VIRGINIA, the most important result of the election might end up being the amendment creating the new constitutional amendment. It was an issue that split Democrats in Virginia, with Senate Democrats supporting the amendment and House Democrats mostly in opposition. FairMapsVA, which supported the amendment, raised more than $2 million to support the ballot initiative. Fair Districts, which opposed the amendment, accused the campaign of using big money donors to tilt the outcome.

"Our campaign was truly a grassroots campaign that was outspent over 50 to 1 by out-of-state dark money groups and was fighting an uphill battle against biased language on the ballot meant to gain votes for the measure," the statement said. "The people who pushed Amendment 1 know of its flaws, and it is now incumbent upon them to seek real solutions to fix those flaws, not just lip-service efforts like ‘consideration’ of Virginia’s diversity."

"The legislators cannot control or override the citizen voices as six of the eight citizen members must vote for any map for it to be approved," said state Sen. George Barker (D-39), who was one of the leading voices in support of the amendment. "Additionally, the voting rules also preclude the types of outcomes we have had previously because the maps cannot unduly favor either political party."

The redistricting amendment was not the only successful ballot initiative on the ballot. Voters across Virginia also approved an amendment creating tax breaks for veterans. Voters in Fairfax approved bonds for transportation, libraries, parks and health and human services. In Norfolk, voters approved a new waterfront resort and casino, which will be built by the Pamunkey Indian Tribe on the Elizabeth River next to Harbor Park.