Thanksgiving Through the Years

From war and pandemic to claptrap and taffeta, the evolution of the holiday in Alexandria. 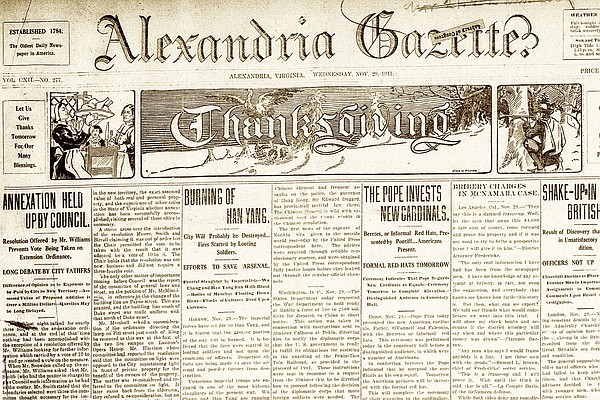 "After two years of the most severe trials with the constant arduous calls for service, with the trying days of the scourge of the Flu," wrote Elizabeth Reid, president of the Alexandria Hospital Board of Managers in the Gazette, "the hospital has borne the burden with most encouraging ability."

The woodwork on the exterior of the building needed painting. The laundry needed new machines to handle the crush of patients. The doctors needed X-ray machines. Perhaps the most pressing need was for a new ambulance, "one of which her citizens will be proud and one which their loved sick will not be ashamed to use in their helplessness." The appeal from the board of managers was front-page news for the Gazette's Thanksgiving issue, 1919.

"Help little or much as you and your friends have benefited by having this institution in your midst," she concluded. "Our usual Thanksgiving appeal has been distributed through the churches and city for groceries, vegetables and anything you can contribute to help the work."

THE STORY OF THANKSGIVING is fake news riddled with misinformation and fraud. Contrary to popular opinion, it did not originate with the Pilgrims in Plymouth. Historian Michael Gannon argued that the first Thanksgiving happened in St. Augustine in 1565. Virginia also has claim to an earlier Thanksgiving than the Pilgrims, celebrating Thanksgiving in 1619. In an interview shortly before his death in 2017, Gannon said the reason people think of Massachusetts as synonymous with Thanksgiving is because of a successful marketing campaign.

“It was a matter of ignorance and self-promotion, but the people of New England seized on everything that they wanted to to say that they were the first," said Gannon. "Of course, they weren’t. But they gathered all the publicity and promoted themselves from that day down to this."

Virginia also has a claim to celebrating Thanksgiving before Massachusetts. More than a year before the Pilgrims arrived in Plymouth, a group of English settlers arrived at Berkeley Plantation near Richmond and celebrated Thanksgiving, 1619. Many Virginia purists like to overlook the Florida Thanksgiving and argue that Virginia is the rightful heir to the Thanksgiving bounty. Descendants of Captain John Woodlief, who led the mission along the James River, say the modern idea of Thanksgiving is a skillful bit of public relations.

“I think that basically new New Englanders had the upper hand when it came to publicizing the Thanksgivings, and I mean that seriously," said Graham Woodlief, a descendant of Captain John Woodlief, in a 2016 interview. "They had better PR than we did."

THE NATIONAL HOLIDAY has its roots in the Civil War, when President Abraham Lincoln issued a proclamation declaring the the final Thursday of November 1863 a day of "Thanksgiving and Praise to our beneficent Father who dwelleth in the Heavens." The Alexandria Gazette published the text of the president's official proclamation, along with a notification that King Street would be repaved and an announcement from the clerk of the market that Market Square would be closed for Thanksgiving

"Large preparations are making at the North for 'Thanksgiving Day,' 26th of November," the Gazette reported on Nov. 13, 1863. "Raisons, lemons and grapes, &c., are arriving, opportunely, in vessels from Malaga, &c."

Unsurprisingly, the idea that the federal government could order people to stop and reflect on their lot in life encountered resistance in Virginia. Even before Lincoln issued the proclamation, Virginia Gov. Henry Wise described the idea as a "theatrical national claptrap." The president who was overseeing the military occupation of Alexandria didn't make things any better by making it a national holiday. Well into the 20th century, the idea was looked at scornfully by people who clung to the Lost Cause.

"In the days when the slavery issue played such a conspicuous part in the political issues of the country, it was thought no good thing could come from New England," explained the Alexandria Gazette in 1911. "Thanksgiving Day, that relic of the Pilgrim Fathers, while not regarded with contempt, was not entered into with the earnestness which characterizes it now."

A STROLL THROUGH the pages of the Alexandria Gazette shows that the holiday evolved over the years, especially in the advertisements. In 1913, the Rammel Hotel opposite City Hall offered an "old-fashioned Turkey Thanksgiving Dinner." In 1919, the Old Dutch Market offered Thanksgiving Fruit Cake "with lots of fruit and nuts" for only 55 cents. In 1921, Bendheim's department store suggested Thanksgiving would be a great time to buy new window shades, a new rug or even a fashionable new outfit.

"Why not a new dress for Thanksgiving?" the 1921 advertisement asked. "Assembled here is a lot of 75 dresses representing our choicest styles, tricotines, sateens, canton, crepe, serges and taffeta dresses."