People at Work: Nothing Stops Music—Even the Coronavirus 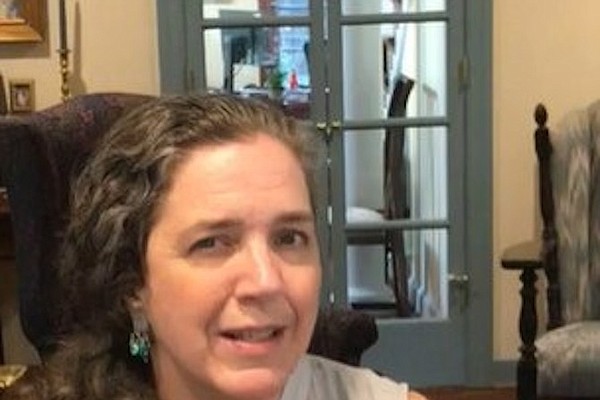 Victoria Gau sits in her unfinished basement office with the window overlooking the garden with her silk plant from Amazon, new rug and the screen blocking off the stuff she doesn’t want everyone to see. Gau is the Music Director of Monday Morning Music (MMM) which was established 50 years ago in Alexandria to widen the appreciation of classical music.

Gau teaches her Monday morning classes from her basement where she moved from the luxurious choral room at the Alexandria First Baptist Church when the coronavirus pandemic hit in March. “This room is comfortable, and I’m finally redoing it. Sometimes I am teaching upstairs at the concert piano.”

But she is not in a rehearsal room or concert stage anymore. “It’s so sad.” Maestra Gau has held the position of Artistic Director/Conductor of Capital City Symphony for over 20 years and now also holds a new position as Music Director of the Cantate Chamber Singers. But she says, “I think the ladies in my class like the Zoom format for MMM. It is strangely intimate. We are on there chatting and you see each other closely.”

In March when the coronavirus hit, Gau said she quickly learned about Zoom.

“That feels like 50 years ago. I realized I can keep going.” She says she had such an intense life with three big jobs. All of a sudden the conducting quickly disappeared. Gau realized she had to react very quickly to engage with the world and not be a cultural relic.

She says most of the Zoom MMM group is ladies from her previous class in Alexandria, but this summer when she taught a special series focusing on Black composers, she had some members of local orchestras and choruses around the area who joined the class. And now people can tune in from around the country. She explains that people got really excited about the Black artists. “It was all new music to them.”

Gau flashes a screenshot of 12 Black Artists. “See William Grant Still, May 11, 1895-Dec. 3, 1978. He is pictured as a young man and an old man. This gives you the character of the person. I can embed videos, play entire musical examples.” She stops sharing the screen. “Let’s chat.”

Catability wanders across Gau’s desk flashing its tail as Gau answers questions from the students in the class. They wondered why they hadn’t heard about the Black artists. But she says “the reason is that in concerts the public tends to want to live in their comfort zone so we feed into that fear, and we give them what they want to hear. We have to get people excited about things out of their comfort zone. Wow, look at all this stuff there is to discover.”

Gau says sometimes people want to know if the composition was popular at the time it was composed; sometimes how it relates to the art of the period like Bach to Baroque. Or maybe how long it took to compose, such as the Messiah that Handel wrote in three weeks. “I ask them what they were doing three weeks ago.”

Gau says it can take her four hours to prepare for a class if she has presented the topic before. In another capacity she often gave pre-concert lectures for the National Philharmonic Orchestra as its Associate Conductor. “I like to interact with people and share my passion.” She says a new topic can take 10 hours of preparation “and with MMM, I have all of the visuals. But that’s the great thing about it for me; learning is what I do with my entire life.”

Gay Pasley, now Chair of the MMM Board, has been a member of MMM since about 2000 when the group was in a different format. “It was almost a generational thing. The group was founded 50 years ago by retired professors from Virginia Theological Seminary who wanted something to do. Later the lectures were combined with a tea and held in people’s homes.

But she said when that generation aged and retired and “it seemed like we weren’t going to exist anymore, it was just too painful so we reformed. We just wanted to get together to enjoy classical music.” Now while coronavirus restrictions are in place the programs are in Gau’s home. “We have enthusiasm for how she is teaching us. It is interactive.” Pasley continues, “we have an age mixed group and a variety of experience ranging from people who have never had any exposure to music to those who have played in the symphony.”

MMM has been offering two seven-class semesters, one in the spring and one in the fall with the goal to meet twice a month. For the first time in the summer of 2020, MMM offered a three-part program entitled, “Black Composers Matter, Too.”

Gau says as we enter the political season in our country, arts are a part of how we express ourselves. The fall season beginning Sept. 21 will be “Defining America — Classical Music and the American Voice.” It begins with the Czech Dvorak being brought to America in the 1890s to show this new country America how to write American music.

What is unique to America; what is our voice? What is the most authentic music and what is our voice today? It concludes with Joel Thompson’s 2016 choral work, “Seven Last Words of the Unarmed” which takes the last words of seven unarmed black men who were killed, Kenneth Chamberlain, Trayvon Martin, Amadou Diallo, Michael Brown, Oscar Grant, John Crawford and Eric Garner.

“It makes me cry just to say it. It is a strikingly powerful composition for orchestra and men’s chorus.”

She says these composers look at the American dream. It has dark sides but ends up with hope. “Who are we?”

As she looks forward to live performances in the future, Gau says, “we all just want to make music.” She says on Sunday she has four paid soloists at church who will have a quick outdoor rehearsal, then zip into the sanctuary for half an hour to make a recording. But no people there to listen. She thinks it is possible in the spring there could be live concerts again. “It’s me holding on to hope because you have to.”

For information about signing up for the seven part fall MMM semester, contact: glpasley@gmail.com.