From slave plantation to industrial pollution, a hidden history of North Old Town. 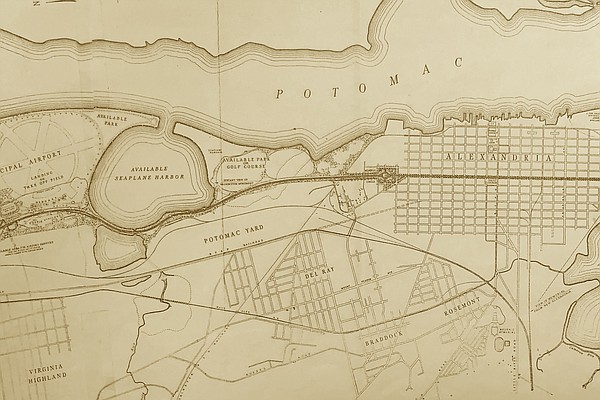 The Potomac Electric Power Company opened the Alexandria power plant in 1949 to provide power to the Pentagon, parts of Maryland and the Rosslyn neighborhood of Arlington.

The shuttered power plant dominating the landscape in North Old Town has layers of industrial pollution, a hidden history buried under the contaminated soil of the Potomac River Generating Station. Even before the coal-fired power plant was constructed in 1949, the property was home to the American Chlorophyll Company and Potomac River Clay Works. That means the long and complicated task known as "remediating" the property could mean removing everything from coal ash and mercury to industrial fertilizer and hazardous metals.

"What I'm most worried about is the process by which they dismantle the plant," said Mary Harris, president of the North Old Town Independent Citizens Association, who lives in neighboring Marina Towers. "The air emissions that will come from that are very concerning."

The land where the power plant is now located was once a slave plantation owned by the first rector of Christ Church, Townshend Dade. In the 1920s, the area experienced rapid industrialization. The American Chlorophyll Company set up operation on the spot where the power plant would later locate the coal pile. And the Potomac River Clay Works had an operation on what is now the parking lot of the power plant. Neighbors in North Old Town say they want all that contaminated soil cleaned up rather than capped in place and left where it is, a common way to deal with these kinds of heavily polluted sites.

"We are committed to a transparent community engagement process and to working with the community and city leaders on the redevelopment of this site into a sustainable and inviting mixed-use district of which we can all be proud," said Melissa Schrock, senior vice president for mixed-use development at Hilco Redevelopment Partners, which is redeveloping the site.

SHORTLY AFTER the neighborhood moved from a rural agricultural area to an industrial zone, Alexandria annexed the property from Arlington in 1930 — an annexation that Arlington opposed in court, a fight they lost. A few years later, in 1940, the Potomac Electric Power Company started looking at the site for a potential coal-fired power plant. Company officials realized that the Benning Road Power Plant, built in 1907, and the Buzzards Point Power Plant, built in 1933, would no longer meet the needs of the region.

"To provide the facilities necessary to meet the increasing demands of our customers, the company has embarked upon a construction program of unprecedented magnitude," wrote Pepco President Alfred Neal in a 1949 newspaper column. "In addition to expanded transmission and distribution facilities, a new power station at Alexandria, Va., is being constructed, which will eventually have a capacity of 400,000 kilowatts."

The dedication luncheon of the new plant in October 1949 included 250 officials from Virginia, Maryland and the District of Columbia. Neal explained to the assembled dignitaries that Pepco realized it needed to do something in 1940, and so the company purchased the 23-acre property in 1942 and started demolishing the industrial uses that were already on the site. He added that the war slowed down progress on the project, although he added that the final product represented a huge step forward for Pepco and the region.

"This investment, which will enable the company to continue to meet its responsibility of providing an adequate supply of electricity to its District of Columbia and Maryland customers is the largest item in the company's post-war expansion program," Neal said.

THE LONG BATTLE to close the power plant started with a group of neighbors who were sick and tired of coal dust collecting on their windowsills and patio furniture and worrying about the dangers of the pollution. Eventually, they got together and spent about $3,000 out of their own money to hire a meteorologist to study sulfur dioxide in the pollution that rained down on North Old Town known as "downwash." That led to a state investigation that eventually led to a zoning change evicting the coal-fired power plant from the city.

"It was a long, hard haul, and we had so many obstacles," said Elizabeth Chimento, a North Old Town resident who led the fight. "But the truth finally won."

Chimento said when she first raised concerns about the danger of pollution, city officials were reluctant to do anything about it. That's why she and Poul Hertel teamed up with Tim Knight to finance that privately funded downwash study that eventually led to the plant closing. During that time, she worked with Councilwoman Del Pepper and Councilman Paul Smedberg to keep up the pressure on Mirant, the Atlanta-based company that operated the facility for years.

REDEVELOPMENT OF THE power plant will be guided by the Old Town North Small Area Plan, which City Council approved on June 24, 2017. It calls for housing, office space, retail and dining options as well as open space and affordable housing. When the community was considering the plan in the spring of 2017, Mayor Justin Wilson said he had never seen a neighborhood be so favorable to growth and development. Since that time, North Old Town has seen a number of large scale projects and construction. Now the pendulum may be swinging in the other direction as fears of overdevelopment mount with each new block of residential housing opens for sale.

"There is an enormous amount of development that is happening all at once in that area, more than I think we realized was going to happen all at once," said Wilson. "Normally when we do these plans, we're planning around a 20 year or 30 year cycle. But it happened all at once here because the market was super hot and remains super hot."

Nevertheless, Wilson says, the future of North Old Town is an opportunity to match the new vitality to the south. The vision of unobstructed public access along the waterfront was a dream for decades, but now the 2012 Waterfront Plan has finally made that a reality. For now, that public access stops when people hit North Old Town. When the power plant is demolished and redeveloped, though, he says Alexandria will have an opportunity to replicate the recent redevelopment that has transformed the southern half of the city's waterfront.